Our second trip to York where we stay on a rugby pitch and it is easy to walk into York along the river. We chose a great level pitch next to another motorhome so we have plenty of space by the gazebo. 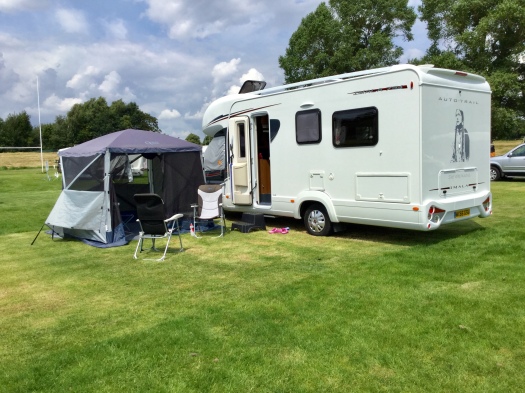 After lunch we sat in the sun but by 14.30 I was bored and we got ourselves together and walked towards York city centre. Sue got an ice cream from a van along the river. There were a few boats tied up including a make shift bar.

Today we stopped at the main park and watched the world walk by and there were some very interesting sights. Sue called it letching but I was just admiring the views presented by the locals enjoying the sun.

We returned home and tonight I had the Cadac BBQ going with sausages and burgers while Sue cooked some chicken in the normal oven. The sun was still quite strong at 20.00 so we sat outside and enjoyed the end of the day.

This morning we stayed by the Moho and read our kindle books. In the early afternoon we went for a walk. Starting off following the cycle route north. This was particularly hard for Sue because there was a large herd of cows and their calves. Sue is scared of cows so it was a great achievement to make it through the herd when some were eating right next to the path, in touching distance.

We left this field and followed a footpath across the flood plain to the river. There was a large area of bank that had been eroded by cattle and a couple of blokes were swimming a number of greyhounds.

We climbed back up the flood bank and followed it along the river where it eventually crossed the cycle path. We returned along the cycle path back to the campsite. Unfortunately we only managed 7500 steps but that was better than sitting around all afternoon.

Tea tonight is steak on the Cadac along with salad and roost potatoes.

We met a couple in a van behind ours and I chatted to them last night. This morning they bought us a book about the Snickelways in York. Later in the morning we walked into York and tried to find some of the ‘Snickelways’ which are little alleyways and passages between buildings, short cuts from when York was built. We found a couple and we have decided to make the effort to find more or even complete the whole route the next time we are here.

We got back to Iona at lunchtime and spent the afternoon reading. Our final bbq tonight was burgers, sausages, with grilled baby corn and Courgettes. It is dry and warm tonight so we hope the rain will stay away. The Quest room is still up so I hope it does not rain for long.

Well it rained all day and we stayed in the motorhome, reading our kindles. We went for a short walk in the afternoon in between showers. It is forecast to be dry tomorrow so I will leave the Quest up and hope it drys before we pack it away.