We set off for Ripon and the drive took us 2.5hrs. We arrived at the Lockside Caravan park, the entrance was quite tight but we squeezed through and found the stewards.

Due to the rain the sloping grass field was wet and the stewards told us that we could not get on or off with our motorhome. We were offered a hard standing pitch which turned out to be the road, we could not sit outside because it was part of the roadway and no windbreaks or awnings. After about 30 seconds of thought we declined the offer, turned the van around and left.

We headed for the A1M but stopped at the first lay-by to gather our thoughts. I remember seeing that there was a THS (Temporary Holiday Site) at Sutton on the Forest just North of York. Sue got the Out & About book and we checked that it was on. It was, so I rang the steward and he told us he had plenty of spaces and the ground was fairly firm.

Off we drove again, stopping for some fuel on the way. We arrived within 30 mins and the site was totally different. It was in a field behind a farmhouse and as flat as a field can be. Toilets, Showers (50p), and generous pitches. The Stewards were very friendly and we could choose any pitch. I paid for 4 nights staight away.

We filled Iona with water and choose a North/South facing pitch beside a hedge. The ground was a little damp and I did spin the wheels a couple of times but the the traction control soon sorted that and we reversed onto the pitch and used the front ramps just to level up.

What could have been a disasterous start to our trip actually turned out better than it first appeared. Although there is limited walking and we will miss the Cathedral and Museums that Ripon had to offer. I am sure we will find some things to do, there is a bus that runs past the farm, it goes into York and some small villages around us.

The sun came out and we sat outside this afternoon enjoying the peace until it was time to cook tea. After watching Gone Fishing with Paul Whitehouse and Bob Mortimer last week, Sue decided we should try one of their Heart Healthy meals. Basically this was Lamb cooked on the Cadac and served in Pitta bread with salad and Yoghurt filling. Not being a great fan of the Greek Yoghurt I had mint sauce instead and I have to say after two pitta breads I was nearly full. However there were also some chipolata sausages on the griddle and a couple of those finished off the meal.

We sat outside until about half past eight when the Sun dropped behind some trees and the air began to chill. It was a good end to a day that could have gone horribly wrong at Ripon.

The weather has changed and today we have drizzle with more rain forecast throughout the day. We decided to go for a walk. 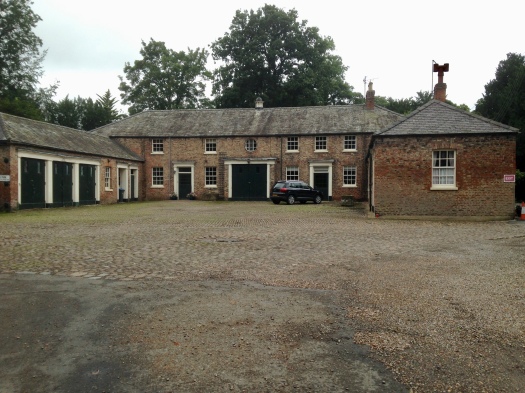 We left the campsite and headed towards Sutton along a path cut in the grass verge. Then we found a footpath and headed across two fields to a wood. Here the path went right and we followed it until we came to the back of Sutton Park Hall. In the out buildings there was a forge and a tea shop. The hall was used in filming Gentleman Jack. We followed the drive past an impressive old Stables and Carriage house, now converted to living accommodation. 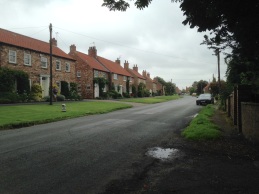 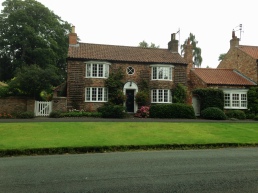 The exit road lead to the main street in Sutton on the Forest, here the road was lined with picturesque cottages, a lot were probably original estate workers homes. 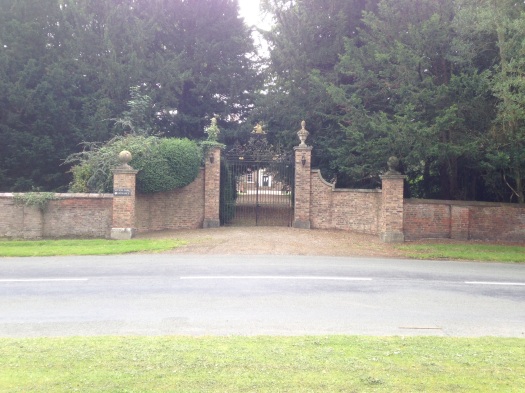 There is a church in the village which we went to have a look at. Outside the church is a mosaic next to an Oak tree, this was planted in 1997 to commemorate the Queens Jubilee. The tree is now 22 years old and about 30’ in diameter and it is getting too big for the railings that surround it. 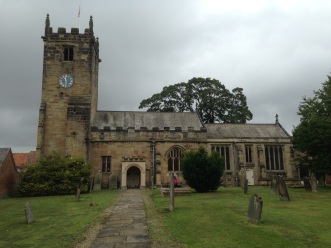 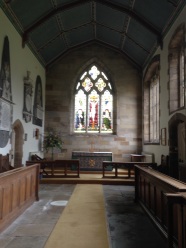 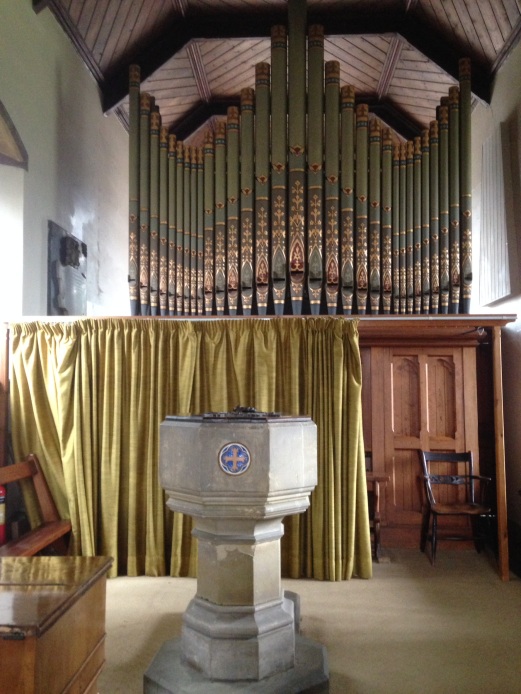 We decided to carry on our walk and headed towards the village of Huby which was 1.5miles away. The path was well maintained and the grass had been cut recently so the going was fairly easy. Huby has a pub, and a village shop/post office. There is also a fish and chip shop. We walked along the main street and past an old Chapel that had been converted into a home. There was not much else to see apart from the now typical cottages and old farm buildings. We headed back to Sutton.

Once back in Sutton we walked past the Hall and found the Pub, which was open but today was not a day to stop for a drink outside. We turned around and made our way back through the wood to eventually reach the campsite. We had been out for a couple of hours and coverd just over 6 miles. Time for lunch and putting our aching legs up for a hour or two.

This evening we will have our food inside. A pick and mix tonight of cold meats, cheese and salad, hopefully with a glass of the red stuff for me and Rose for Sue.

Today we stayed at the van and in the afternoon the sun came out from behind the clouds every so often. The wind continued to blow and the gusts were quite strong at times. We made the most of it although it got quite cool when the sun went behind the clouds. Tomorrow the forecast is rain so it maybe the last chance to sit outside.

During the afternoon we were given displays by the RAF as they headed towards the local RAF station at Linton on Ouse. It seemed one of the big transport aircraft was practicing touch and goes, we saw the same aircraft go around six or seven times as well as a few Tucano aircrafts doing circuits. This is the main base for training fast jet pilots before they go to RAF Valley and Hawk jets.

My turn to cook on the cadac tonight. I had just started when next door neighbour’s dog came sniffing around the BBQ. It had already been around at lunchtime when it went into the motorhome and nearly had some pork pie from Sue’s lunch plate. I went next door and told them that I did not have a problem with them parking on our pitch but the dog running around off the lead was out of order. We never saw the dog again and they moved their car.

Raining today but we went for a walk at 11am heading towards Sutton Park but turning left and followed the wood but although the map on my phone said the path would take us to the road past a caravan site , the path basically stopped at a farm track so we turned around and walked back the way we had come.

We met a lady walking her dog and we asked her about the footpath but it seems it has not been maintained and the only option was to follow the farm track to the York road. She also told us of a small nature reserve. This was on the way back to the campsite so we made a detour and soon found the footpath.

The path followed the edge of a wood, path a dry pond. The path lead us to a series of wire netting runs with Ducks, Geese, Guinea fowl and Chickens. The path opened up to allow vehicle access to these pens and we followed it to the road where there was a sign explaining the nature reserve.

We followed the road back to the campsite. It started to rain and continued all afternoon and into the evening. Sue cooked us Chinese style chicken and potato wedges.

The following morning the rain had stopped but it started again as soon as i started packing. The ground was getting wet and slippery and I had to use the traction control to get the van off the field and onto some hardcore. The end of another trip, next time we head to Derbyshire.