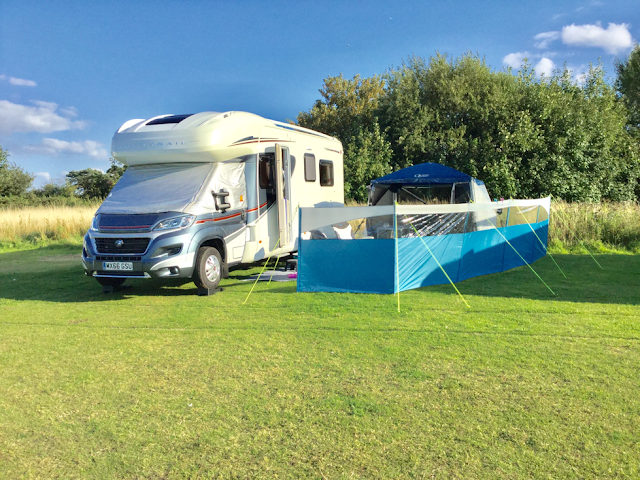 We have been to North Norfolk every year since having a motorhome, normally it is Cromer or Heacham, this year have chosen Wells next the Sea, and Richard our eldest son and our granddaughter, Martha, are staying nearby in a holiday cabin.

We now have a pop-up gazebo, see the previous post, that will give us a bit of extra space and shelter if the weather  changes along with a wind break so we should be ok.

Sue did the shopping and was sorting it out so I went to put some water in the tank, I switched on the pump and it made a few funny noises and eventually switched off, there must have been an airlock but I thought I would just check the pump. It looked OK but then I removed a shelf and it looked as if it had been dripping, then it started to drip. The next half hour was spent removing the pump and cleaning the diaphragm before refitting. This fixed the leak again. Fingers crossed it holds longer than last time.

Arrived at Wells before lunch and we soon set up the new gazebo and the windbreak. After lunch we went for a walk into Wells, just to visit the Quay but we got carried away and walked all the way to the sea and out onto the sands.

After a walk about we headed back to Wells and we walked a different route up a street with all manner of shops from fresh fish, hair dresser  and curio shops.

This lead us to the Old High Street that was full of painted houses, many of them were shops by their frontage and we found a few plaques telling what the building once was.

Sue cooked tea tonight of Steak , stuffed mushroom, onion rings and sauté potatoes. It was really good and with the steaks from Lidl they out shone the previous ones from Asda, although they were a bit more to buy.

Today there is a chance that the weather will be warm and once the coastal haze has burnt off we should be fine. Richard and Martha arrived at about 10.30am and after a cup of tea we got packed and headed for the beach. Instead of the full walk we stopped at the quays and caught the train which goes to a holiday park, we then walked the remaining 1/2 mile to the beach.

The tide was nearly in so instead of walking miles we turned right at the slipway and settled about 25yds along the beach. The day was spent paddling , digging was a favourite pastime although Martha just copied the family beside us.

We left the beach at about 16.00 and because there was a queue at the station we walked the mile and a half back to the quays.  Richard and Martha went to the park and Sue and I walked back to Iona to get the kettle on. Once back at the van Richard left Martha with us and he went to find his accommodation which turned out to be a lodge on the Holkham estate, he then rejoined us for tea.
Day 3:
Awoke to torrential rain hammering on the roof but by the time I looked at the clock it was 9.00am. By 10.00am I had done the normal jobs and the rain had stopped and it looked as if it might brighten up.

Richard and Martha arrived and Martha soon had Sue playing a card type game. They decided to go to a play farm near Fakenham and hoped the rain stayed away. I felt a bit sick so I stayed at the van and basically read my kindle book and lazed about.

When everyone arrived home Richard and I had a beer and then we all walked into Wells for a Fish and Chip supper at a recommended chip shop, ‘Frenchies’. We queued to get served and then waited for a couple of items to be cooked to order. We got our order and we ate them on the sea wall by the quay. Richard took Martha to the park and Sue and I walked home via the Co-op to pick up some milk and cheese for tomorrow’s pack-up.i bought a pack of Addams mixed beers because they were on offer.

It rained first thing but by the time Richard and Martha arrived at the van the sun was out and the beach was the chosen activity. We caught the narrow gauge train and at the other end we found the car park only 23% full so we could have driven after all. We set up on the beach and spent four hours building sand castles and I did some reading. As the tide came in I spotted a seal climbing up the opposite side of the channel. Later we spotted another seal in the water near the lifeboat station ,  Richard and I sat a watched it dive and surface for some time before heading back to our patch of sand.

By 3.30pm the sky had darkened and we packed up and headed towards the quays about a mile and a half away. We walked this time and by halfway the rain came and we got a bit wet but by the time we reached the quays the sun had come back out. We bought some dressed crabs and walked back the the van, as we entered the school grounds my Fitbit signaled 10000 steps.

Tea tonight is Lasagne that Sue had prepared before we left home, Martha had Pizza and I sampled a couple of yesterday’s beer.
Day 5:
Return home. The carpet, windbreak, silver screen and the gazebo are a little damp so they will all need drying once home.
Trip 15: 169 miles, 27.9 mpg, 33mph av, 5hrs travel.

2 Replies to “Off to Norfolk”