Lyndon Top is fairly local to home. It is only 30 miles away and most of the journey is on the A1. The site is set in 117 acres of grassland overlooking Rutland Water, a man made Reservoir.

You can cycle or walk around the reservoir, we did it twice years ago, once on bicycles and all 22 miles and once with our sons when they were 4 and 7. That time the eldest had a fixed wheel bicycle and about 6 miles in he had an asthma attack. I cycled back with the youngest on the back on the bike to collect the car.
Today we arrived to find the wardens were offsite, but after a call we got the code for the barrier and were told to park where we wanted. The main fields were empty with only two campers on the 30 acres although a few others were scattered in adjacent fields. We set up broadside to the reservoir and put up the gazebo as a wind break.
Maddie the manager arrived and we paid and had a chat about the council trying to shut the site down, paid for three nights with the option of a fourth depending on the weather.

A quick lunch and some internet and it began to rain. We stayed out in the gazebo for half and hour and retired to Iona where is was a bit warmer. The rain continued all afternoon so our first walk was postponed. 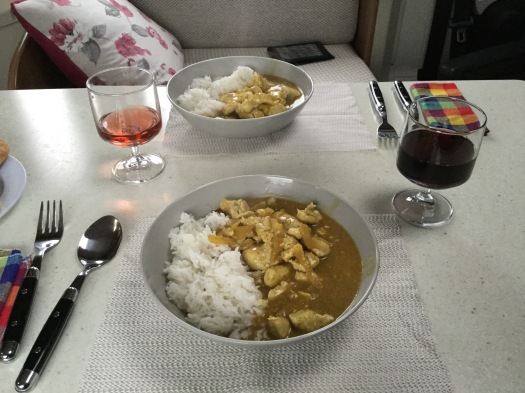 Tonight,due to the weather we were going to cook inside. Sue cooked a Chinese style curry with naan breads. Obviously the new large bowls were part of the meal.
Day 2:
The rain has gone and although the sun was out first thing the clouds soon came back. The wind has changed direction and was blowing directly into the gazebo so the first job was to turn it by 90 degrees. It turned out to be easier than we thought, now we are sheltered from the wind. 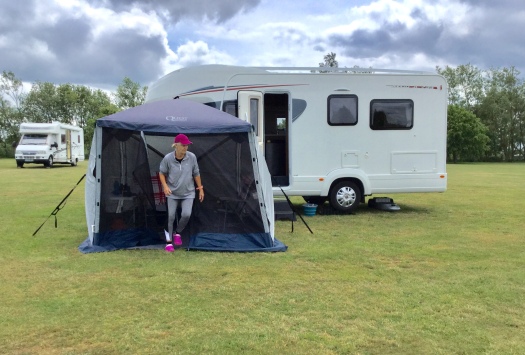 It was soon time for a walk. We decided to go and find the garden centre which turned out to be much nearer than we thought so we walked past it with the intention of calling in on the way back.
We walked along the cycle path to the village of Manton and took the first footpath towards the reservoir. The final footpath sign pointed across a sheep field and we could see people walking the other side of the hedge, however we could not find a style or gate so we climbed over a fence and across a ditch to get to the path.
After about 300yds there was a sign to a tufted duck hide and another pointing towards the Osprey Viewing point. We turned around and headed to the Ospreys hide. The hide was full of people and the guides were talking about the Ospreys and their journey from Europe. We watched the Osprey feeding the four chicks fish on a TV screen, and then looked through telescopes at the nest which was about half a mile away on a pole in the reservoir. We sat and listened to the guides talking to other visitors.
We left the hide and made our way back to the visitor centre, it was then we realised that we had managed to get to the viewing point without actually paying, but we were not going to admit it to anyone. We did buy an ice cream from the visitor centre so we don’t feel so bad. 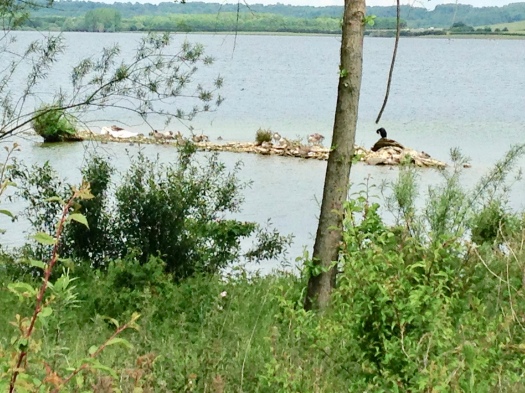 We continued back to Iona for lunch and a relaxing afternoon in the gazebo watching the reservoir. The garden centre has been put back until tomorrow.
The afternoon and evening are forecast to be dry. I will be cooking tea on our new Cadac.
Day 3:
Today we walked the opposite way around the reservoir towards the dam. Before we had even got onto the path we were given a demonstration of low flying by a huge RAF transport plane as it banked low over the reservoir.The picture makes it look a lot higher than it actually was. 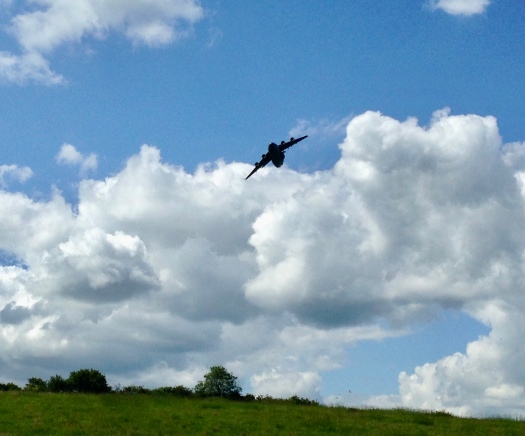 We went past the sailing club and continued on to the visitor centre.

Before we got there we came across a sheep shearing team, that was setting up to shear a small flock beside the reservoir. From here we continued to Normanton Church, which sits in the reservoir. We had a walk around it and saw that it was all set up for weddings.

We left the church and continued towards the dam but we never got there. We got past the hotel but our legs were beginning to feel the distance, we had done about 4 miles. We stopped at a bench for a breather and watched the sailing boats. 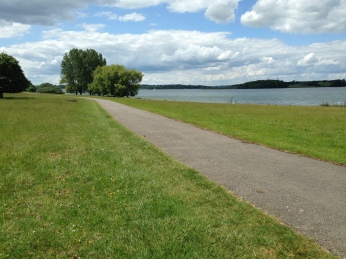 It was time to head back. We did manage to see the shearing team in action as we walked back. There was only a few sheep left by the time we got there.

Back at Iona we had been out for three hours and walked roughly 8 miles.

After tea, we had steak tonight, we watched the sunset and Sue went in to watch TV. I suddenly decided that if it was going to rain tomorrow and Saturday then I would pack away the gazebo. 20 minutes later the gazebo and all the acccessories were packed away in the cupboards.
Day 4:
As forecast the rain came at 11.00 am just as we set off for a walk. We left Lyndon Top and walked along the road to the local garden centre. According to their website they grow over 90% of the plants themselves.
They certainly had a great choice but we did not buy anything this time. It was lunchtime and the cafe was packed so we headed back to Iona.
The rain continued so we stayed in and read our kindle books. I had to put the heating on at three just to warm the van up a bit.
Sad as we are, we timed a fellow camper put up a new Quest gazebo, it was different to ours so I had to go and talk to them. Yes I want one if ours ever breaks.
Tea tonight was spaghetti bolognese with fresh pasta.
Trip 8: 72.3 miles, 25.9mpg, 32mph, 2hr 11m travel.

2 Replies to “Iona goes to Rutland”

MY TRAVELS THROUGH THE YEARS