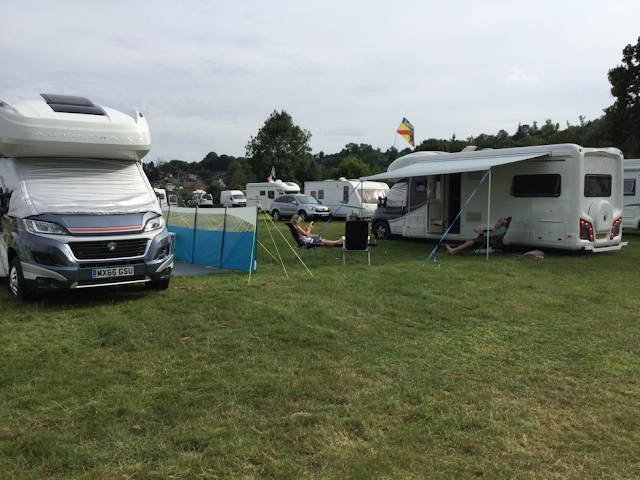 The drive to Bridgnorth took 3.5 hours, some of which was stuck in traffic holdups, otherwise it was pretty easy with only a couple of complicated roundabouts. We arrived in sunshine and after signing in and filling with water the steward showed us to our pitch next to our friend, Peter, who arrived the day before us.
For once when we checked how level the van was ,it was spot on and no ramps were needed. Sue and I soon had the wind break up and all the other bits and bobs sorted. We joined Peter to catch up on his travels.
We walked to the river and a little way along on the opposite bank were a collection of coloured tents set out as a holiday venue. 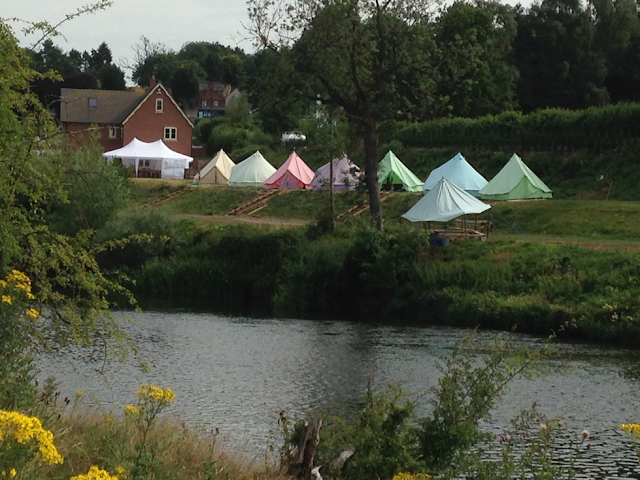 The wind dropped and we cooked tea on the Cadac (bar-b-que) and then Peter joined us and we spent the evening sitting outside with a drink or two.
Day 2:
Woke at 8.am and we were up and about by 9.30am. The plan today is to walk into Bridgnorth and catch the train to Kidderminster, but getting off at Bewdley on route. The weather forecast is fine all day so we don’t need to take any wet weather gear today.

This year the Severn is much lower than on our last visit.

We got to the station with 10 minutes to spare and boarded the train, the engine was a black tank engine of British Railways vintage and our carriage was an old LMS maroon coach. While waiting for our journey to start it was decided to get off at the second stop,Highley, where there is a museum and visitor centre, this would give us about an hour before the next train arrived.

The museum was a purpose built engine shed with Locomotives, trucks and carriages as well as interactive areas for children and lots of information and story boards. There was a video section which we didn’t get involved with but there was some interesting information about a land slip that shut the railway down for several months, and later on in our journey we would see further work to stabilise the hill with concrete and iron rods.

Within the exhibits was a Royal Carriage that was used by King George VI complete with bedrooms, lounge and and office area with the obligatory red phone. Next to this carriage was a Royal Mail coach, used for sorting mail on route made famous by the Great Train robbery. Peter was quite interested in this because he worked for Royal Mail at one time.We toured around the other locomotives and then Sue bought some ice creams which we ate outside in the sun. It was soon time to get back to the station and catch another train for the next part of the trip.

The next train was again a tank engine but it was pulling ‘Flying Scotsman’ carriages that were open without dividers, ornate fixtures and fittings with veneered wood. The walls had mirrors next to ornate metal coat hooks to enable passengers to check their appearance at the end of their journey. You could imagine these first class carriages filled with well to do Edwardians. As we proceeded onto our next stop the scenery was set out below as the tracks hugged the contours of the hills then through deep cuttings, the whole route lined with old telegraph poles complete with the original wires that had not been used for decades.
As we arrived at our next destination, Bewdley, we left the station behind and made our way down into the town, over the river Severn via an ornate bridge. Bewdley was a busy river port where boats would tie up along the keys and unload into warehouses and merchant yards that can still be seen although now they are domestic dwellings and offices. We went to a pub along the riverside and had a drink, but decided the food was a bit over priced and of limited choice when we only wanted a sandwich. So after a pint we made our way into the centre of the town via a Tesco to get a sandwich, which we ate on a seat near a church that sat as an island in the narrow roadways that passed either side.

As we continued our walk we found a park that appeared to be large on the map but in reality it was quite small as we soon found out as we arrived at the town museum. We left the museum and made our way back to the station via a different route so we could look at some old buildings that we had seen from the train. We got back to the station and had no sooner sat down on the platform when the train glided into the station. The last leg of our journey took us into Kidderminster, which is also the end of the line.
We had half an hour befor the Train returned to Bridgnorth. We stayed onboard the carriage and as the locomotive was swapped from one end to the other. I watched it being filled with water before being connected to our carriage which was now directly behind the engine. This was much noisier than any of the other trips and soot came in through the windows and dusted the table with little black spots. This was the last train back to Bridgnorth and very few people boarded at the stops along the route. In one station we passed a ‘Special’, which only had two carriages but the passengers were enjoying champagne and Cream teas from what we could see.
Back at Bridgnorth I lead our party, Sue, Peter and Lara the dog into the Station Bar for a thirst quenching drink before we walked back to the campsite. It finished off our day out nicely. After tea we all gathered outside and sat talking and drinking until about ten o’clock which ended a great day.
Day 3:
Having been spoilt with great weather so far we were woken at various times by rain hitting the roof. It was then I remembered the table and chairs had not been put under the van. It was too late now they will dry in the wind. This morning the sun made odd appearances.The rain stopped and the sun made brief appearances during the morning,we stayed around the van today and hoped that the rain would stay away until we had cooked tea.
Sue was making a paella for us and we had invited Peter to join us. As Sue got all the ingredients ready outside it started to rain, but fortunately it was only a light shower and the sun came out. We ate outside but it soon became very cool and we retired into Iona to finish off the evening.

Day 4:
Very windy this morning, with more rain forecast. We hope to walk into town today to have another look around before we head for home. Once the rain stopped we did walk into town and up to the Castle ruins and the memorial garden, instead of taking the winding path we went for the steps up the cliff face, but we eventually made it although I was out of breath for a while.

We left the castle and walked into high town where a market of sorts was being held. We made our way from the market place up to the church and the old grammar school and took some pictures before walking back along the high street.

We walked down Cartway which was the only way to get carts from low town and the river up to high town. Cartway was lined with Inns, shops and Brothels according to history. The only Inn left on Cartway now is The Black Boy, we have stopped here before so we were drawn in again for a drink and a cheese cob, or in my case ham. This pub has won the Camra Bridgnorth Pub of the Year three times since 2014, and I can vouch for the beer I had.

Once refreshed we made our way to the bottom of Cartway where there is an ice cream parlour. Once equipped with an ice cream each we went and sat by the river to finish them. All too soon it was time to continue back to the campsite. Our timing was perfect, we got the windbreak and carpet put away and the heavens opened for the rest of the afternoon.
Tonight we have bratwurst sausage in baguettes with bread and cheese to follow.
Day 5:
Heading for home I forgot to load my chosen route so it was half an hour before I realised that the sat nav was taking us home via the M54, M6, M42 . I was a bit worried at first but then I realised where it was taking us. The route was a bit quicker but longer with lots of easy cruise control driving until we reached Nottingham and then it was back to normal.
Trip 12: 237.5 miles, 30.5mpg, 35 mph.